Juneau is Alaska's capital and the third largest city, and although it is on the North American mainland, it can not be reached by road.  Our cruise ship nestled in their port, and just visible across the Gastineau Channel in this picture, gives you a great view of the city's layout. Juneau is quite compact so most of its attractions are within walking distance. Look for as many as 20 signs around downtown that will detail the city's fascinating history. Although not my favorite stop for shopping, it is the primo spot to take a helicopter excursion to land on any one of the several glaciers.

We chose ERA Helicopters, who give a fantastic narrated tour.  I'll tell you up front, I was nervous about going up in a "bubble" over mountain peaks with weather that was iffy... at least it looked somewhat rainy/cloudy where we were headed.  But, our pilot quickly eased our fears, and we relaxed as we  took off for Taku Glacier.  The views were heavenly!  The ease with which our pilot, AKA Jack Bower, flew the copter was impressive and was not like flying in a small plane: they maneuver easily through clouds, rain, and they land so gently!  I decided that if I were to get a pilot's license, it would be for helicopters.

It is interesting to note that Taku Glacier has a small calving, a normal geological process of breaking ice sheets and a documented rate of advancement since 1988 at 17 meters a year.  Taku covers 261 square miles and is about 57 miles long - all the more reason to take a helicopter ride to see it all!
I was overjoyed by this adventure and would highly recommend it to all!
http://www.eraflightseeing.com/content/e3/e18/e32/
ERA Flights do provide shoe covers for traction, but if you have hiking boots or Sorel boots like mine, you will be fine without them. I stayed warm on the glacier with a parka, hat, and gloves.  In town, I did not wear the hat or gloves because the temps were never colder than 55 degrees. We all enjoyed the climate even when it drizzled.
After being dropped off in town, we headed to Hanger on the Wharf to eat.  Wild Salmon was the deal for me while others ordered locally caught Halibut. Strolling back to our ship, we met other cruisers who had a great time touring Mendenhall Glacier or who went on the whale watching tours. Juneau is a great place to observe Eagles and marine life from its timbered slopes to its rocky shores. In fact, mid-May through mid-September is their peak season of tourism, the return of the humpback, gray, and orca whales, when bears come out of hibernation, and salmon spawn.
This year, June 2010, we missed the salmon who were late, did not see bear, and missed the pod of whales as we came in to Juneau because we were on the wrong side of the ship while dining!  Go figure. We did not, however, miss the beauty of the mountains, icebergs, glaciers, sea lions, otters, eagles, jelly fish, or even the hummingbirds. (I can't attract hummingbirds at home in my Florida garden, but they came to visit us on our deck at the back of the ship in Alaska!  Double go figure!)
Posted by Unknown at 10:32 AM No comments:

The Palm Restaurant in Tampa 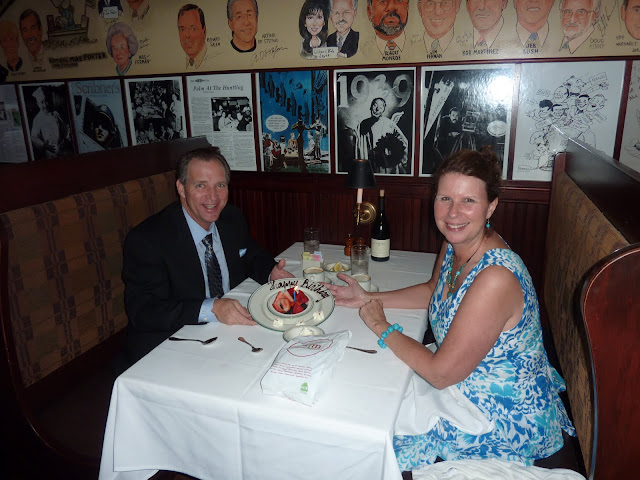 The Palm Restaurant is surely one of those experiences that keep you coming back for both their and menu choices with new specials every month.  We have enjoyed going enough to have joined their 837 Club which has been a real value.
Even upon entering The Palms you know you are in for a personalized dining experience when the front staff welcomes you and escorts you to your reserved table.  If you visit often enough, they know you by name, seat preference, and even the wait staff you prefer.  As for belonging to “the club” that steps it up a notch!
Special occasions are my favorite, and I will tell you a little story.  When I took Ed there for his birthday, I had ordered ahead of time a large lobster (a gigantic 6 pound female lobster- they have the best tail) for us to split.  When we arrived, the staff took us to our table and wished Ed a great birthday…they knew and seemed delighted we chose to celebrate with them!  Our favorite waiter, Adrianna, knew we did not want bread nor the croutons on our Ceasar salads (she really remembers that kind of thing!) and proceeded to parade out the lobster for our inspection, much like they do for the wine selection, and presented both front and back of that baby.  It was huge, blue, and very fresh!  We also ordered a filet mignon medium rare to split.  Our bottle of wine was discounted $20.00, another perk of the 837 Club, so this really became one of our favorite birthday celebrations. 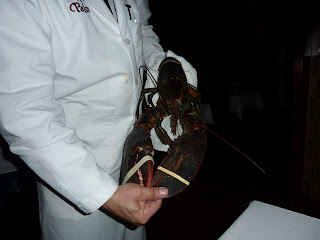 When the lobster came, cooked this time, it was shelled in front of us and laid on a warmed plate.  I did not even have to touch the shell.  It is nice to be all dressed up and smell pretty…and stay that way after eating lobster.  Of course, our steak came out perfect; they certainly know their rare and medium rare.  The wine, the food, and the were exceptional.  But, the sweetest part of the night came when we ordered our Cappuccinos. 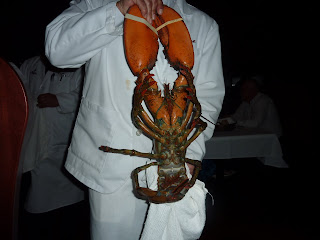 We were on a low carb diet, so we do not order desserts either, so Adrianna came with the staff and a beautiful serving of fresh berries and a Happy Birthday written on the plate!  Now that was special and unexpected. 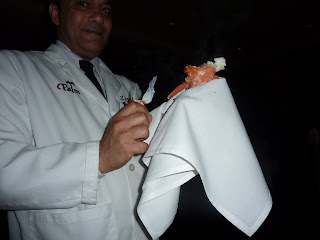 The Palm is a place we often take guests, or my husband takes clients for the business lunch (double points!).  I’ll let you check into their membership and menus, etc.; they are a primo steakhouse worth a visit! 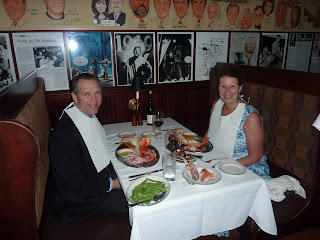 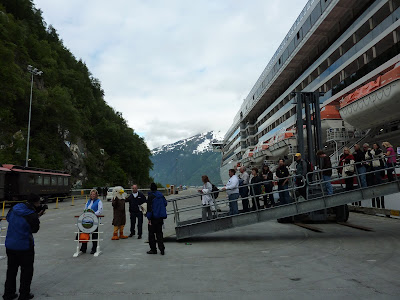 Our first port on our Carnival Spirit cruise was Skagway (skaguay), and right across from the ship was our train for the White Pass & Yukon Route excursion!  Wow, we'd have to tour the town after our ride through the gold-rush country.  It was already filling up, but we (Ed, his brother and wife, and a friend and his daughter) lucked out by passing through several cars before finding car 202 (this is top secret info for my readers)) - it was the handicap car, but we had it to ourselves! 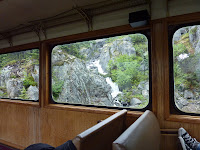 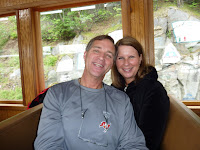 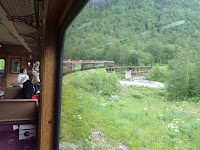 As we chugged our way along, it was both exciting visually and relaxing.  The view from the top of the summit was breathtaking, and so very different than Florida's tropical scenery.

We learned much on this narrated ride up to the border of Canada/USA, and that we'd reach the summit at 2,865 feet elevation where the gold rush stampeders could pass only if they had a years worth of food and supplies. Needless to say, the gold-rush brought all sorts of "crazies" into this town, and the hardships were many.  The stories of the loss of human life, horses, etc., were sad...and all for money.  Did you know that Nordstrom and Trump's great grandfathers got their start up here with the gold rush?  Turns out Trump's grand daddy owned a brothel up there somewhere!  Nordstrom used his gold earnings to start a shoe store (knowing that women love shoes) so he could find a wife, and eventually lead to the famous Nordstrom Department Store.

Besides the wonderful pics (too many to paste in here), there was some wildlife to see: from eagles to some type of otter.  We were all on the look-out for bear, but did not see any from our train car though others had reported seeing one.  At the summit, our train turned around, and as usual, many people enjoyed standing outside between the cars.  It was cold enough to need coats and see our breath; the air was so clean smelling and refreshing. 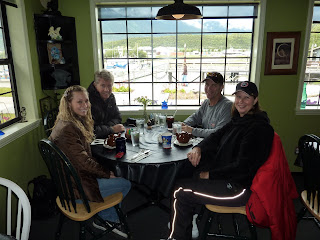 In town, we decided to stop for early dinner at a place called Stowaway Cafe.  You should check out the Jimmy fries and dippin' sauce!  We also enjoyed a meal of King Crab, though as it was explained, is still flash frozen on the fishing boats because they stay for days to get their quota.  Most of us have seen Deadliest Catch, so we enjoyed the crab anyway.  Other fresh catch of the day choices are listed - the salmon is always a favorite. 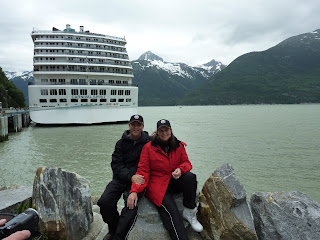 Well. Skagway is a fun little town.  There is the Klondike Gold Rush National Historical Park - a great museum, and the well known Red Onion Saloon.  As for shopping, there were lots of deals on T-shirts and souvenirs, and you can't get lost; its that small with only a few main streets.  I have one disclaimer - I loved shopping the most in Ketchikan, so save some money!

The next blog will cover Juneau, Alaska.
Posted by Unknown at 12:15 PM No comments:

On cruising Alaska, the room does matter!  Most of the ships going to Alaska have their balconies, so everyone can see the ports and scenery du jour.  But, there is one room worth planning for, and it is Room 4228 at the back of the boat on the Carnival Spirit. 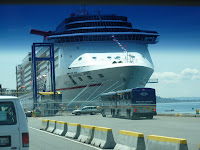 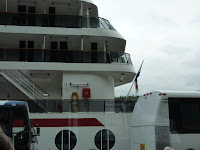 I asked lots of people who had been on an Alaskan cruise, and they unanimously said it was a trip they would take again. With their suggestions, and guidance from our cruise coordinator, we organized a complete and fantastic journey into the unknown wonders of Alaska. To start, we knew that the view was imperative on this type of cruise because taking pictures was one of our priorities on this trip. Coming from flat Florida to the glorious mountains, well, I just had to find some eagles, bears and moose, goats/sheep, and icebergs!  Our room afforded all of that.  Room 4228 had almost as much exterior room on the balcony as it did in the room itself. It curved around to the side, and lucky enough, was the side of all the port calls.  We could enjoy people watching after a day of shopping, and we could watch the ever-changing scenery right from our bed as well.  The cabin was fantastic and much like a super nice apartment with wonderful wait staff at our beck and call. Besides, being our anniversary didn't hurt. 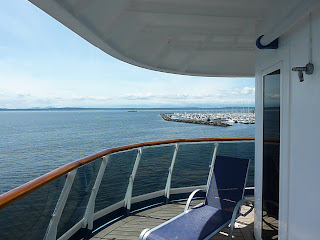 From this view, we didn't miss much!  I must have photographed a dozen eagles, saw a sea lion, and spent hours lounging outside watching the snow covered mountain peaks, glaciers, numerous iceburgs of all shapes and sizes and many of those were so blue. I have to admit I missed seeing bear and moose...but I am sure they were there somewhere!  Ed rented a pair of great binoculars from the ship, and I hogged them most of the time. 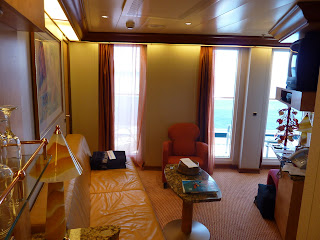 Our first day at sea as we were racing to the most northern port, we were a bit sea sick, but I quickly learned I could lay in bed and actually enjoy the ride. Its when you try to stand and fight it that you feel the sickness and Bonine really works. We had those awesome windows and the curtains wide open, so we could see out for miles.

This cruise, we did not do as much of the entertainment (evening shows, karaoke, casino, etc.) as we had on other cruises, but with that balcony and view... it was worth giving up for the serenity we felt out there with mother nature.  Since we traveled with four others, our balcony was often the place to be...plus room service was free! 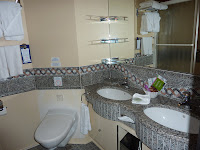 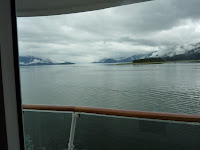 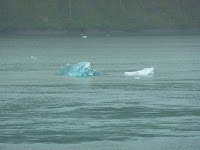 From our deck, you could see everything!  Even when it drizzled, we were covered and enjoyed looking and taking pics like these.

I will get to more later in upcoming segments of our trip to Alaska... the ports, the shopping, and neat places to eat.
Posted by Unknown at 9:34 AM No comments: